Two days after the close of IBC 2014, eligible residents of Scotland went to local polling stations to answer one question, “Should Scotland be an independent country?"

Irrespective of the outcome in the end, the need to communicate the referendum and its ramifications for Scotland and the UK was vital. Trilogy Communications, a leading intercom supplier, has announced that the BBC’s coverage of the Scottish Referendum relied heavily on Trilogy talkback throughout the coverage. Trilogy’s main system had already been installed in Glasgow in the primary studio that was used for the BBC’s coverage, with links to two galleries on site that provided output, backup and graphics for the results coverage.

The Glasgow system was linked to Trilogy’s flagship Gemini intercom system at the BBC’s OB operation at Elstree Studios in England by virtue of Gemini’s unique IP and distributed matrix connectivity. Gemini was used at Elstree for internal communications as well as OB clean feeds and 4-wire circuits. 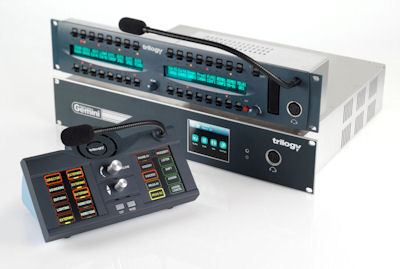 The nature of the polling process meant that there were many sites that were inputting news and information at any time. A running order therefore became speculative at best, which meant that internal communications took on a critical role. Trilogy enabled the special broadcast teams to communicate between sites with vital information, guidance and instruction immediately.

“Live news, particularly polling results, constitutes a benchmark example of the importance of reliable, multi-site internal communications,” said Ewan Johnston, Trilogy’s Sales Director. “The pace of what amounts to election night coverage is fast and furious and the last thing you need is a floor manager or presenter who can’t hear the director.”

With Trilogy’s Gemini at its core, the BBC also made use of legacy Trilogy equipment, including Commander, Orator and Mercury. Mercury is a flexible real-time voice communication platform built on core VoIP technology. The system provides all the operational features associated with conventional digital matrix intercoms with the added benefits of easier, low cost networking of multiple systems over standard IP network architecture.

In cases such as this where a digital matrix like Commander or Orator already exists, Mercury provides a modern, decentralised intercom that serves both as the network link and as a routing matrix for up to 32 users. A wide range of interface boards are available to connect control panels, 4-wire circuits, telephones, radios and in-ear monitors.

Johnston adds, “This is an illustration of how our legacy technology has the reliability to perform in the long-term while being flexible enough to be seamlessly integrated with newer technologies such as Gemini for contemporary requirements.

“A substantial range of Trilogy’s intercom equipment has been successfully used for BBC voting and polling coverage for at least 15 years. Our latest technology is set to further extend our reputation of ultimate reliability.”